The Foxes in the Henhouse: Republicans in Charge of Climate and Energy Committees 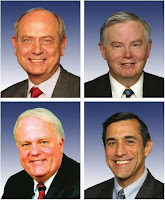 Republican midterm gains in Congress have resulted in a shift that has empowered the GOP and crushed hopes for climate and energy legislation. In the House of Representatives, Republicans are getting ready to take control of several powerful committees that have a direct impact on energy and the environment.

Fred Upton (R-Michigan) is by far the most rational of these five Republicans on the environment. Upton is one of the frontrunners to lead the Energy and Commerce Committee in 2011.

Unlike some of his peers, Upton acknowledges that global warming is real. He told the energy committee early last year: "I have said at nearly every climate change hearing that for me I don't dispute the science. Right or wrong, the debate over the modelling and science appears to be over." He was an architect of the incandescent light bulb ban, and he has cast votes in opposition to oil and gas production from offshore areas. However, Upton can be expected to try to limit the powers of the Environmental Protect Agency (EPA).

Joe Barton (R-Texas) also wants to lead the Energy and Commerce Committee but he needs a waiver to bypass GOP committee term-limit rules to become chairman. He won notoriety this summer when he apologised to BP for the White House deal establishing a $20bn oil clean-up fund. Barton called the fund a "shakedown".

If denied the energy and commerce committee, Barton could be a contender to head the science committee, which would provide him with a platform to preach his climate science denial. He also has his sights set on reducing the power of the EPA.

In a letter welcoming the winning Republicans to the House, Barton congratulated them on their "well-deserved victory," and he foreshadowed his leadership when he wrote, "When I am chairman, you won't find any Democrats applauding."

Doc Hastings (R -Washington), is currently in the Natural Resources Committee, he will likely serve as its chairman in the 112th Congress. His pro-energy record on energy production will likely translate to more fossil fuel developments on federal lands, both onshore and offshore.

Darrell Issa (R-California) is a high school drop-out who was arrested in his youth for auto theft, it is more than a bit ironic that he will have far-ranging subpoena power in the new Congress.

Issa is now poised to become chairman of the House Government Oversight and Reform Committee. As chairman of the most powerful oversight committee in the new Republican House, Issa will have enormous power.

Despite thousands of independent studies that support climate change, Issa says it is time to take yet another look at the science. "That doesn't mean that global warming isn't happening," Issa conceded, but he wants to buy more time by saying the issue of climate change requires more study. (This is a common Republican strategy designed to indefinitely forestall action on climate change).

Even though the so called "climategate" scientists were cleared by five seperate inquiries, Issa recently told POLITICO that he would use his panel to conduct further inquiries into the stolen “climategate” e-mails. And he also plans to keep a close watch on the EPA. Issa has indicated that he would like to kill the committe on energy independence and global warming.

Jim Sensenbrenner (R-Wisconsin), is on the select committee on energy independence and global warming, he wants to keep the Committee alive so it can investigate climate science and police President Barack Obama’s green policies. Sensenbrenner would like to take over that committee, even though he thinks global warming is an international conspiracy.

Sensenbrenner is a climate denier of the first order. At the height of the controversy over hacked emails from East Anglia last year, he warned of "a massive international scientific fraud" and science "fascism." On his web site, Sensenbrenner indicates that he believes the Obama administration is part of a global climate conspiracy.