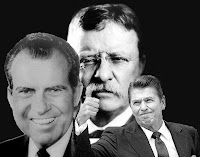 Great GOP leaders of the past fought to save natural treasures, signed landmark environmental-protection laws, and established many of the environmental policies we take for granted today.

Teddy Roosevelt, established America's unmatched system of wildlife refuges and national parks. Barry Goldwater, was the father of conservatism, and a lifelong conservationist.

Ronald Reagan signed a treaty to protect the upper atmosphere’s protective ozone layer from chemical emissions in 1987. The treaty was the most significant international environmental agreement ever negotiated.

As Ronald Reagan said, “What is a conservative, after all, but one who conserves. We want to protect and conserve the land on which we live – our countryside, our rivers and mountains, our plains and meadows and forests. This is our patrimony. This is what we leave to our children. And our great moral responsibility is to leave it better than we found it.”

The Bi-partisan efforts of previous decades succeeded in putting an end to environmental catastrophes like burning rivers, toxic waste dumps and DDT.

Modern day Republicans have no special exemption from polluted air and contaminated water. They would do well to remember the past and the environmental legacies of some of their finest leaders.