Happy Birthday to the Greenest President in US History 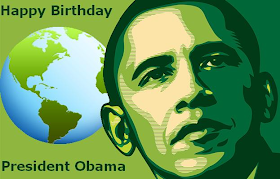 On the occasion of his 53rd birthday it is fitting that we review some of US President Barack Obama's historic green accomplishments. In addition to putting the economy back on track after the financial crisis of 2008, President Obama has radically improved the employment picture and made a number of significant advances in his effort to deal with the climate crisis.

Despite obstructionism from Republicans in and outside of Congress, President Obama has managed to use his office to make great environmental strides. Much of what he was not able to achieve due to knee-jerk opposition from Republicans, he has managed to accomplish through a combination of green executive orders and environmental regulation. This includes higher vehicular fuel efficiency standards, energy efficiency, and most recently emissions reductions from power plants

President Obama's green stimulus investments including efficiency  helped to pull the US out of the most serious economic downturn since the great depression. President Obama and NOAA have also worked to preserve the oceans.

The Obama administration has been a champion of solar power and wind energy. The President's $90 billion in subsidies for green energy has significantly increased renewable energy in the nation. American wind-power generation has doubled, and solar power has increased more than six times. Obama also announced plans to triple the amount of energy derived from renewable sources for federal facilities

By the end of 2009 the President could already boast many green accomplishments and by 2012 the President had expanded his green achievements.  However, it was not until the summer of 2013 that he provided irrefutable proof of his sincere committment to a more environmentally sustainable America.

After his historic Georgetown University Speech in the summer of 2013, the Obama administration released a national strategy to combat climate change. On March 26 the administration released a national strategy aimed at conserving, enhancing the resiliency, and making sustainable use of the nation’s natural resources. This roadmap contains key steps for the next five years to reduce the current and expected impacts of climate change on our natural resources. The strategy includes efforts for sustaining fish, wildlife, and plant resources and the services they provide, now and into the future.

Through the EPA the President has announced plans to cut carbon emissions from power plants. According the NRDC, curbing power plant emissions will reduce our reliance on coal by about a quarter and national carbon emissions by 10 percent. Stanford University research indicates that Americans support the plan.

These initiatives combine with emissions data that suggests environmental progress is being made in the US. American carbon-dioxide emissions dropped emissions dropped 3.7 percent in 2012. After decades of rising atmospheric carbon, US emissions started to decline in 2008 and they keep falling. By the end of 2012 emissions had fallen almost 12 percent below the 2005 level. The US is already two-thirds of the way to its environmental goal of 17 percent reductions. Even though about half of this decline in emissions is attributable to the recession, the President can still take some of the credit.

The President has also supported a wide range of green innovation including new fuels, turbines, and energy meters, that are helping to make the country more environmentally sustainable. Obama has worked with nations around the world including China, France, the Netherlands and Germany to advance climate action.

Buoyed by the President's efforts, the nation is moving from being one of the worst climate culprits in the world to being a global climate leader.
The Green Market Oracle
Share