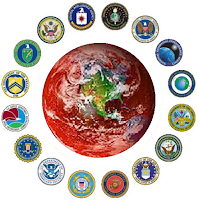 The US military has acknowledged a diverse assortment of risks from climate change. One of those risk involves infrastructure. The Pentagon currently manages more than 555,000 facilities and 28 million acres of land including 704 coastal installations and sites that are vulnerable to flooding. Other military bases and installations are susceptible to a wide range of climate impacts.

On May 20, 2015, the President gave a commencement address to the Coast Guard at Cadet Memorial Field in which he called climate change a National Security issue. The President delivered his address as more than 100,000 gallons of crude oil were spilling into the Pacific Ocean and contaminating beaches and killing wildlife along the Californian coast near Santa Barbara. Around the same time as he was speaking the Coast Guard was actively surveying the extent of the spill.

During his address the President cited a host of climate related corollaries that impact national security from rising sea levels and drought to the increased risk of terrorism and violence due to poverty, social tensions and political instability. He talked about wildfires, melting permafrost in Alaska and how extreme weather can increase the number of climate refugees and exacerbate conflicts over scarce resources like food and water.

He also made it clear that we must do more than adapt to climate change we must actively mitigate it by slowing down the warming of the planet. As explained by the President:

"Climate change constitutes a serious threat to global security, an immediate risk to our national security, and make no mistake, it will impact how our military defends our country. And so we need to act—and we need to act now... In Miami and Charleston, streets now flood at high tide. Along our coasts, thousands of miles of highways, roads, railways and energy facilities are vulnerable. It's estimated that a further increase in sea level of one foot—just one foot—by the end of this century could cost our nation $200 billion."

As reported by Rolling Stone, climate change poses a serious threat to US military bases. Norfolk Virginia is home to the biggest naval base in the world and the headquarters of the U.S. Navy's Atlantic fleet. The its spectacular assemblage of American military might and seventy-five thousand sailors and civilians that work there cannot stop the rising seas that could cause the base to vanish into the Atlantic Ocean. Already storm surges flood the base and wreak havoc on 29 other military bases (including Langley Air Force base home of the Air Combat Command), shipyards and installations in the area. Other bases will also vanish like the naval base on Diego Garcia, in the Indian Ocean.

"Military readiness is already being impacted by sea-level rise," says Virginia Sen. Tim Kaine. In less than half a century many of these bases are expected to be under water. Moving these bases will cost hundreds of billions of dollars.

Rear Adm. Jonathan White said, "When you see what's going on down there [in Norfolk], it gives you a sense of what climate change means to the Navy — and to America. And you can see why we're concerned."

Outgoing Secretary of Defense Chuck Hagel recently called climate change "a threat multiplier" that "has the potential to exacerbate many of the challenges we are dealing with today — from infectious disease to terrorism." His comments are but the latest in a long string of climate warning coming from the US military.

In October 2003, the Pentagon published a report titled "An Abrupt Climate Change Scenario and Its Implications for United States National Security." The report warned that threats to global stability posed by rapid warming vastly eclipse that of terrorism. The report was authored by Peter Schwartz and Doug Randall who concluded, "this report suggests that, because of the potentially dire consequences, the risk of abrupt climate change, although uncertain and quite possibly small, should be elevated beyond a scientific debate to a U.S. national security concern."

Adm. Samuel Locklear III, who is in charge of all US armed forces in the Pacific said, "The political and social upheaval we're likely to see from our rapidly warming planet...is probably the most likely thing that . . . will cripple the security environment, probably more likely than the other scenarios we all often talk about.''

A 2013 study by analysts at Princeton found that in some parts of the world, global warming could lead to a 50 percent increase in conflict by mid-century. Even the conflict in Syria has a climate change connection. As reported by Grist, a March 2015 study published in the Proceedings of the National Academy of Sciences. Colin Kelley, a geographer at the University of California-Santa Barbara, found that" a multiyear drought as severe as the one that hit Syria from 2007 to 2010 was made two to three times more likely because of climate change, compared to natural variability alone."

Speaking about the Pentagon's October 2014 report, Hegel said: "We have already seen these events unfold in other regions of the world, and there are worrying signs that climate change will create serious risks to stability in our own hemisphere," he said.

Pentagon officials said the report would affect military policy. "The department certainly agrees that climate change is having an impact on national security, whether by increasing global instability, by opening the Arctic or by increasing sea level and storm surge near our coastal installations," John Conger, the Pentagon’s deputy under secretary of defense for installations and environment, said in a statement. "We are actively integrating climate considerations across the full spectrum of our activities to ensure a ready and resilient force."

A May 2014 CNA Military Advisory Board report indicated that climate change is already threatening both our national security and economy. The Board is composed of 16 former military Generals and Admirals. Retired Vice Admiral Lee Gunn (President of the CNA's Corp. Institute for Public Research) pointed out that the U.S. military is the single largest consumer of oil in the U.S., and highlighted the necessity for the military to transition towards renewable energy in order to improve its operational efficiency and flexibility.

"The bottom line is, what we’re trying to show is that these trends are due to the climate change signal," Kelley said. "There’s no natural signal for that."

Climate change is a far greater global threat than terrorism. As explained by the Princeton research, a case can be made suggesting that climate change can actually cause terrorism. However, Republicans appear to be transfixed by terrorism and utterly disinterested in climate change.

It is an oxymoron that Republicans are at the forefront of climate denial yet they are also strongly supportive of the military.

Republicans are doing their utmost to misinform the public about the strong connection between climate change and national security. In 2009, then-CIA director Leon Panetta started the Center on Climate Change and National Security. However, thanks to Republican pressure it was disbanded.

Last spring almost all Republicans in the House voted for an amendment sponsored by Rep. David McKinley (R-WV) that south to prevent the Department of Defense from using funding to address the national security impacts of climate change. Specifically they did not want to allow the DoD to spend any money on expenses arising from the IPCC Fifth Assessment Report, The UN's Agenda 21 sustainable development plant or the Technical Update of the Social Cost of Carbon for Regulatory Impact Analysis Under Executive Order 12 12866.

Nonetheless, the “DOD expects climate change to challenge its ability to fulfill its mission in the future.”

Republicans have disavowed reams of climate research because they are beholden to big oil. Last September, in New Orleans, Russel Honore, a retired U.S. Army Lieutenant General, said that the oil and gas industry, “have hijacked our damn democracy. They lobby, they write the laws.” Fossil fuels are “the energy we use,” Honore said. “But it does not give the industry the right to destroy where we live.”

President Obama said in his May commencement address that the evidence for climate change is "indisputable" and he flatly refuted so called climate skeptics saying, "Denying it or refusing to deal with it undermines our national security." He went on to say, "We need to act and we need to act now."