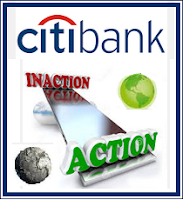 A recent Citibank report showed that if we act to slow climate change we could save as much as $50 trillion. This finding is significant because cost is one of the most common reasons put forth to avoid acting on climate change. The Citi report is but the most recent study to soundly refute the contention that acting on climate change is too expensive. Research shows that climate action offers excellent ROI not to mention saving trillions of dollars of additional costs associated with the damaging affects of a warmer world.

In a report entitled, "Energy Darwinism II: Why a Low Carbon Future Doesn’t Have to Cost the Earth," Citi Global Perspectives & Solutions (GPS), conducted a cost benefit analysis of a low carbon energy economy. The research explored the costs of inaction (business as usual) versus the costs of acting (transitioning to a low-carbon energy economy).

The research shows that the action scenario actually costs less than inaction. Over the next 25 years the cost of a low carbon energy economy would be about $190 trillion while doing nothing would cost around $192 trillion. These figures do not include the $30 - $50 trillion in costs associated with the damage caused by climate change.

Using these numbers Citi concluded that acting on climate change offers excellent ROI (estimated to be around 10 percent by 2035). The Citi report also reiterates the findings of other research which suggest that a carbon tax would be beneficial for the economy.