Climate Polls Give the GOP Cause for Concern 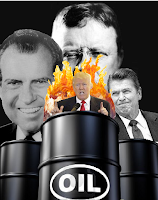 Polls show that Republican voters have a small but growing interest in climate change and this may prove to be a troubling trend for the party. The GOP is now synonymous with being apologetically irrational on environmental and climate issues, but it was not always this way. The anti-science policy stance of Republicans and disagreeable disposition of a large part of their base, are relatively recent phenomena. Less than 2 decades ago there was no difference between Republicans and Democrats on the subject of climate change. Over the last 20 years the GOP has gradually allowed corporate interests, especially the fossil fuel industry, to gain control over party policy. The GOP's corporate servitude effectively excised science from the policy making process.
However, Republican pandering to corporate interests has succeeded in churning out an army of anti-science climate deniers.  In 2016, the Republican's irrational crusade continues in earnest under the leadership of the party's presumptive nominee and chief climate denier Donald Trump.

Trump not only disbelieves the mountain of scientific evidence on climate change, if elected president he has promised to ramp-up federal government support for the fossil fuel industry. This means that a Trump presidency will virtually guarantee that we will surpass tipping points from which we will not recover.

In contrast to Republicans, the Democrats are radically progressive on the climate front and this may help them in November. Led by Martin O'Malley and Bernie Sanders, the focus on climate change in the Democratic primaries forced Hilary Clinton to adopt a much more robust climate position.  This means that for climate voters Hilary is the only game in town.

Although the prospect of a Trump victory is undeniably terrifying, he is also Hilary's best campaign asset and this bodes well for climate action.  Hilary has already taken advantage of the fact that Trump is vulnerable on the climate issue and she can be expected to hammer the point home throughout the campaign.

As explained by Grist:


"These are exciting times for climate hawks. After years of having their issue relegated to second-tier status in presidential campaigns, they’re now seeing the Democratic candidates fighting hard over who will be more aggressive in combating climate change and reining in oil, gas, and coal production."

The GOP is a mess and not just because of Trump. In pushing so hard to the right Republicans created the conditions that would ultimately spawn the Tea Party.  Trump's current incarnation is intended to tap into the politics of hate and division that are the Tea Party's life blood. Republicans created  this low-brow electorate and now they have to live with them (and their odious choices).

It is important to remember that the GOP was not always and anti-environmental party, in fact Republicans have green roots.  There was a time when both parties shared similar views on the issue of climate change. As recently as 1998, a Gallup pole recorded that half of both Republicans and Democrats acknowledged that, “the effects of global warming have already begun.”

Then the fossil fuel industry in concert with the GOP launched clever multilevel assaults on the credibility of climate science. Their climate disinformation machine whittled away at the facts and was reignited in earnest when Barack Obama was elected president in 2012.

In recent years the percentage of Republicans who indicated that they were worried about climate change dropped from almost half to just 13 percent. While Republicans worked on their anti-science denial, Democrats have become more focused on the issue. In 2015, 74 percent of Democrats said increased temperatures are due to human activity, in 2016 that number has risen to 85 percent.

Over the last couple of years polling suggests that some Republicans may be growing weary of the party line. In 2015, 34 percent of Republicans polled said increased temperatures are caused by human activity. In 2016 that figure rose to 38 percent.

If climate change is an issue in this election cycle, Republicans are in serious trouble. While the GOP was looking for ways to ďump Trump, Democrats were forging a climate policy.  Shortly before formally endorsing Hilary, Sanders played an important role in the creation of the most progressive climate platform in Democratic party's history. Meanwhile, Republicans manged to craft a platform that includes clean coal.  Stark choice indeed.
The Green Market Oracle
Share