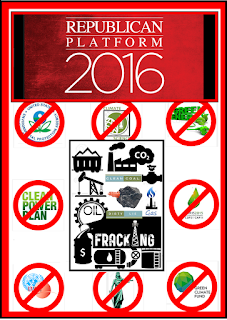 The 2016 Republican platform is an environment destroying climate killer. Party delegates voted to adopt the GOP platform at the Republican National Convention in Cleveland last week. If the GOP manages to fool the American electorate in November the environment will suffer and climate change will hurtle past irreversible tipping points. In addition to some archaic views on LGBT “conversion therapy,” the Republican platform ignores climate change while advancing policy positions that are harmful to the environment. This document defines the party’s official principles and cements their anti-science reputation. This is not just a matter of ideological differences, the Republican platform is utterly disconnected from even the most rudimentary appreciation of science. Worse still they are knowingly deceitful in their pursuit of self serving political gain. Fossil fuel funded lies have come to be the backbone of party policy. If Republicans take the White House, their platform could very well end civilization as we know it.

Republicans have vowed to put an end to the Obama administration's climate action and kill any hope of imposing a carbon tax. The GOP platform would reverse America's clean energy trajectory by decreasing support for renewables and radically increasing support for fossil fuels. If elected they will remove limitations on fracking and expedite natural gas export terminals. They will also build the Keystone XL and many other pipelines. “We intend to finish that pipeline and others as part of our commitment to North American energy security,” the platform reads. They will also end the clean power plan.

They have vowed to kill the the Paris Climate Agreement and along with it the unprecedented international consensus on climate action. While it will be hard to kill the Paris agreement outright, they have vowed to block US funding for climate action, the Green Climate Fund and the the Intergovernmental Panel on Climate Change (UNFCCC). This would effectively kill the agreement. This is what they did to the Kyoto agreement. The platform explicitly states: “We reject the agendas of both the Kyoto Protocol and the Paris Agreement.”

Republicans want to dismantle environmental regulations. If given a mandate by the American people the GOP will eviscerate environmental regulations and enfeeble government regulators.The platform says that if they take power they will "transform the EPA into an independent bipartisan commission, similar to the Nuclear Regulatory Commission." They also want to prevent the EPA from regulating carbon dioxide altogether, effectively taking them out of climate action. This is the same EPA that was created by Richard M. Nixon, the same EPA that fights for clean air and water. The GOP platform disregard its environmental roots by deregulating the kinds of pollution that kill Americans and emasculating any government body that could get in the way.

The courts have been an effective way for citizens and organizations to advance environmental and climate justice. Rulings by judges in the American legal system have helped to pressure the federal government to act in a timely fashion on a range of issues. This proves that no one is above the law not even the government. However, under Republican leadership this would change. The GOP wants to slow these lawsuits. As spelled out in the platform, they want to make it harder to use the courts to push government action.

The Republican platform will also seek to move powers and responsibilities to the states including parks and public lands. This will mean an end to national parks as states simply do not have the resources to assume responsibility for their upkeep. It could also lead to the widespread exploitation of public lands as a means of gleaning revenues. "Congress shall immediately pass universal legislation providing a timely and orderly mechanism requiring the federal government to convey certain federally controlled public lands to the states," the platform reads. "We call upon all national and state leaders and representatives to exert their utmost power and influence to urge the transfer of those lands identified." A Think Progress article explained that this amendment is tantamount to "the indiscriminate and immediate disposal of national public lands."

Humans are not the only ones at risk from the Republican platform. If they get elected the GOP has promised to remove animals like the gray wolf from the endangered species list

In a classic case of the pot calling the kettle black, Republicans call environmentalists “a self-serving elite,” even though they have proven themselves to be the most self-serving party in American history. And when it comes to serving elites, no one equals the magnanimity of the GOP.

The platform make the following absurd statement: “The environment is too important to be left to radical environmentalists.” It would be far more accurate to say that they environment is far too important to be left to a party that in recent years has consistently put corporate interests, especially those of the fossil fuel industry ahead of the national interest and the well being of Americans.

Republicans have to resort to doublespeak as their platform is at odds with the fact that a majority of Americans accept the veracity of climate change and support clean air and clean water.

Even if we ignore the numerous repugnant attributes of the Republican presidential nominee, the GOP's party platform is a harmful assortment of anti-science offerings that will doom our environment and our climate.
The Green Market Oracle
Share