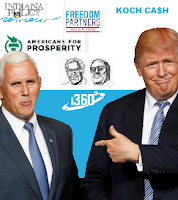 The Republican presidential nominee's choice of VP suggests that the Trump camp may have been hoping to secure support from conservative Christians and the Koch brothers (David and Charles). Earlier this week Donald Trump unceremoniously revealed that Michael Richard "Mike" Pence as his pick for his Vice Presidential running-mate.

Pence is a climate denier and supporter of dirty energy who has sat in the House of Representatives where he amassed an anti-climate and anti-environment voting record.  He has been the governor of Indiana since 2013 where he has been a vocal critic of the Clean Power Plan.

Pence is not overly delicate on the subject of climate change, in fact he has dismissed it as a hoax. In 2001 he explained that he did not agree with the scientific consensus on climate change, he added that the Earth was “actually cooler than it was 50 years ago and that global warming was a “myth.”

“Global warming is a myth...The [Kyoto] global warming treaty is a disaster. There, I said it … The chant is ‘the sky is warming! the sky is warming!’. The only problem is that many Americans, including Vice President Al Gore, didn’t learn of their deceit the last time around and are buying this new bit hook, line and sinker....I think the quiet expansion of the liberal environmentalist agenda by Al Gore and Clinton White House that will cost thousands of jobs could be more important. Say no to the global warming treaty.”

In 2009, he told MSNBC, “I’m all for clean coal technology." In the same interview, he insisted the science of climate change is “very mixed” and he claimed that in “the mainstream media, there is a denial of the growing skepticism in the scientific community on global warming.”

In a 2014 interview with MSNBC’s Chuck Todd, Pence said that he didn’t think the science of climate change was “resolved,” he supported his statement with the observation that Indiana had a “tough winter” that year.

Here are some other energy and climate comments made by Pence in an interview with Chris Matthews:

Pence even supported more offshore drilling in the wake of BP's deadly explosion of the Deepwater Horizon drilling platform and devastating oil spill in the Gulf of Mexico in 2010. He was also a strong supporter of the Keystone XL pipeline.

Voting record in the House of Representatives

When he was in Congress the League of Conservation Voters reported that he voted 201 times against environmental interests and just 18 times in favor. He twice voted against climate legislation and efforts to reduce greenhouse gas emissions.

Opposition to the Clean Power Plan

Pence does more than just question the existence of climate change he works to thwart national efforts to address it. Pence is one of the governors that sued the federal government over the Clean Power Plan. Released on August 3, 2015, the plan imposes emissions regulations that will cut carbon pollution from power plants by 32 percent by 2030 from levels recorded in 2005. The opposition from Pence comes despite a host of economic and employment benefits. Pence has said that no matter what the outcome of his legal challenge, under his leadership Indiana will not comply with the Clean Power Plan.

As reviewed above, Pence has consistently ignored and derided the science of climate change. In a bid to encourage him to engage in a policy informed by science Indiana scientists came together and drafted a letter to Governor Pence criticizing his stance on climate change.

In tapping Pence, Trump may have hoped that he could access both funding and big data, however it has not worked. As explained in an NPR article, Pence's ties to the Koch brothers has not won the oil billionaires support for the Republican ticket.

Pence is a climate denier of the first order but what sets him apart from the others on the short list of VP possibles are his close ties to evangelical Christians and the Koch brothers. Pence describes himself as a religious conservative and he is also a supporter of the Tea Party movement. It should be noted that the founding of the Tea Party has been linked to the Koch brothers.

Pence is much loved by the Koch front group Americans For Prosperity (AFP). Two years ago Pence attended the American Dream Summit, the annual grassroots convention organized by the AFP. Pence has made several appearances at other AFP events.

The Koch brothers ties with Pence run deep and go all the way back to 1991 when he became president of the Koch's Indiana Policy Review Foundation. As a member of the House, Pence's chief of staff was Marc Short, who later became president of Freedom Partners Chamber of Commerce which is a central office of the Koch network. Pence's congressional press aide, Matt Lloyd, went on to become communications director for Koch Industries. Then Lloyd returned to Gov. Pence as a deputy chief of staff.

As Charles Koch said early on in the Republican primaries, Trump is "unelectable." Charles described the choice between Hillary Clinton and Donald Trump as voting for either “cancer or a heart attack.” The Koch brothers disdain for Trump is a serious obstacle to the Republican presidential bid in 2016.

Although David Koch has reportedly given Pence hundreds of thousands of dollars, he has withdrawn a million dollar donation to the Republican National Convention because Trump is the party’s nominee.

In selecting Pence the Trump campaign hoped to tap into the $900 million that the Koch network has earmarked to influence outcomes in this election cycle.

However, a terse email from Freedom Partners spokesman James Davis appears to indicate that the Trump camp's strategy has failed. As explained in the email: "We are not engaging in the presidential. Our focus will remain on the Senate."

Failure to secure support from the Koch brothers is a disastrous blow to the Trump campaign.

Related
Republicans Opposing Trump Say he is Dangerously Unqualified to be President
Climate Action and the Binary Choice between Hilary Clinton and Donald Trump
Trump Promises to Kill Climate Action in RNC Speech: The False Flags of Fear and Division
Climate Avoidance, No-shows, Discord and Nepotism Mark the Start of the Republican National Convention
Trump's Climate Ignorance Would be Laughable if the Implications weren't so Serious
GOP Platform Augurs Environmental Destruction and Runaway Climate Change
Climate Polls Give the GOP Cause for Concern
Climate Change and the US Presidential Election of 2016
Hilary Clinton is our Last Best Hope of Tackling Climate Change
Trump Takes his First Beating with More to Come
A Trump Presidency Would Kill Climate Action and Push us Past Irreversible Tipping Points
Trump Could Win and We All Could Lose
Trump Wants to Mine Coal Frack for Gas and Drill for Oil
Climate Doomsday Clock Advances as Trump Wins the Republican Nomination
Trump's Climate Ignorance Would be Laughable if the Implications weren't so Serious
Trump is Unelectable So Say the Koch Brothers and Others
The Green Market Oracle
Share