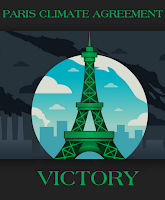 The world's first global initiative to reign in climate change has come into effect. On October 5, 2016, less than a year after the Paris Climate Agreement was signed at COP21, a critical threshold was passed. With the ratification of more than 62 countries, the pact will formally enter into force on November 4, 2016.

Many thought we would not be able to secure a deal in Paris at the end of last year. Then detractors doubted that enough countries would ratify it. The naysayers have been proven wrong.

This historic agreement is designed to combat climate change through drastic emissions reduction pledges known as the INDCs. To bring this carbon cutting global agreement into force 55 countries representing 55 percent of global emissions had to formally join.  The US, China and the EU have all signed onto the deal.

"If we follow through on the commitments this agreement embodies, history will judge it as a turning point for our planet." The President also said that the deal will contribute to a wave of opportunties. "[The pact will] unleash high-tech low carbon investment and innovation at a scale we have never seen before. So this gives us the best possible shot to save the one planet we've got."

See the President's full remarks in the video below: